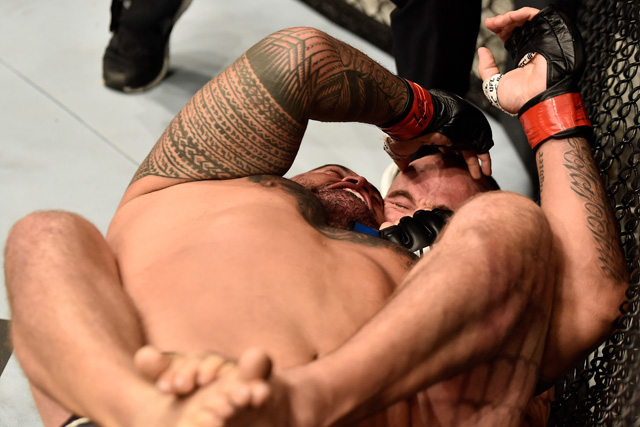 Alexey Oleynik, Jan Blachowicz, Petr Yan and Magomed Ankalaev and garnered $50,000 bonuses for their work at UFC Fight Night 136 in Moscow on Saturday.

Oleynik received “Performance of the Night” honors for his first-round submission of Mark Hunt in the evening’s main event at Olimpiysky Arena. After getting briefly wobbled by a right hand to the head early, Oleynik took his foe down, moved to Hunt’s back and locked in a rear-naked choke to earn the tap at the 4:26 mark of round one.

Elsewhere, Blachowicz captured a “Performance of the Night” award of his own for a submission in the co-headliner. The Polish light heavyweight tapped out the returning Nikita Krylov with an arm-triangle choke from the back 2:41 into round two, giving him his fourth consecutive triumph at 205 pounds.

Under normal circumstances, Yan and Jin Soo Son would have won $50,000 apiece for “Fight of the Night,” but since Son missed weight, he was not eligible for a bonus. Instead, Yan was the only bonus recipient for the entertaining bantamweight clash, allowing the promotion to hand out three “Performance of the Night” checks.

Finally, Ankalaev earned “Performance of the Night” thanks to an impressive first-round finish of Marcin Prachnio in a preliminary light heavyweight affair. The Dagestani fighter rocked Prachnio with a right hook to the jaw and a partially blocked head kick before following his man to the canvas for two devastating follow-up finishes to get the stoppage at the 3:09 mark.