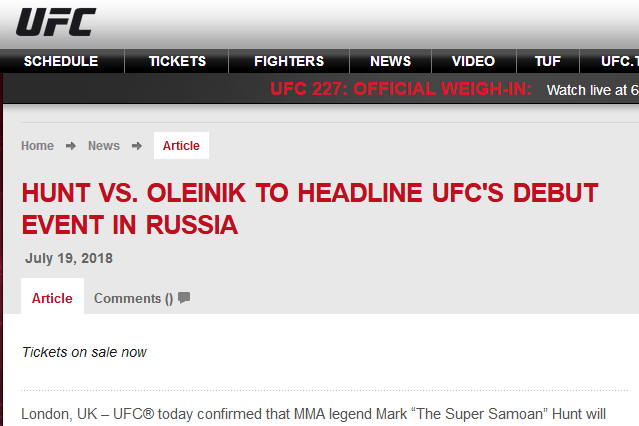 Tickets for UFC FIGHT NIGHT®: HUNT vs. OLEINIK, presented by Parimatch, are on sale now via Kassir.ru.

Ranked No.8 in the UFC heavyweight division, Mark Hunt (13-12-1, 1NC; fighting out of Sydney, Australia) started out his career as a highly decorated kickboxer before turning to mixed martial arts in 2004. Over his 14 year MMA career, Hunt has faced some of the best and most legendary athletes in the world, including Alistair Overeem, former UFC heavyweight champion Stipe Miocic and Fedor Emelianenko.

“I have a lot of respect for Russian athletes, I have fought one of the greatest Russian fighters of all time in Fedor,” commented Hunt, “I think Oleinik will be tough like me, but I will bring my best to this match and he is going to have a long night if he makes it out of the second or third round. My style will win me this fight.”